The starting point of the route is the stone bridge of Konitsa (altitude 440m) and following the riverside road that leads to the monastery of Stomio (680m). From the monastery we follow the old forest road that starts outside the monastery (next to the fountain, which you should count as the first and last source of water on our route) and climbs towards the peaks of Tymfi. We follow for a few minutes (10 -15′) along this old forest road until we meet the intersection to Davalista on our right (altitude approx. 750m). At the point where there is a relevant sign, we leave the road and enter the path. From the first moment the path becomes particularly uphill. For the next 2.5 km we travel the most demanding part of our route (+750 m altitude), a particularly uphill passage, which develops in a richly wooded part of Tymfi. Enjoyable but also particularly tiring, our path begins to level out when reaching the “gates” point (a little over 1500m). The “gates” is a point which the impressive view of the surrounding area forces the visitor to stop. We continue our course and for the next 2 kilometers or so our course “traverses” under the steep slopes. In some parts of this part of the route, we also find some ropes installed in relatively “difficult” passages, but in good weather conditions they are unnecessary. Our path continues, having in its development until the stream of Davalista some small parts, some uphill and some downhill, but without having any noticeable change in altitude.

It should be said that from the first moment we enter the Davalista trail until we left it, our route is on a distinct and well-marked passage. This trail is part of the TeRA 80km race (Zagori Mountain Running), the organizers of which always take care and do a very good job even on the most difficult parts of the trail network of the race. Arriving at the stream we are surprised to see that there is a spring of water, which of course we duly appreciated. We now enter the last section of the Davalista crossing and begin to climb up into the gully passing between its large stones. This last section of Davalista is also particularly uphill (about +250 m altitude) and we always move following the signs that lead us to the “plateau of the lakes” (tsoumanis pit). Upon reaching the plateau (1750 m) we leave the path that until now we followed and on the right we see the new marking on a rock, we follow the indication “to Konitsa, shooting range”. This is the path we must now take in order to enter and cross the “Kerasia” path. The path of “Kerasia” is an old passage that has been cleaned and marked in recent years. It is now included in mountain running competitions (Evathlon) and it is included in the routes that more and more mountaineering groups do. It connects Konitsa with the plateau of the lakes without its route entering the gorge of Aoos, but moves under the slopes of Lapatos. The path got its name from the name of a location located on our route, approximately in the middle of it. Following the path indicated by the new markings, we initially start to climb smoothly until we reach the spot with the nice view of the surrounding area. Then, the route descends for a while and it becomes smoothly uphill again leading us to a second spot. Leaving this point we start to descend, initially quite steeply and then more smoothly, passing under the steep slopes of Lapatos, until we reach the location “Kerasia” (a peak at about 1500m). From here the view towards the Konitsa plain is magnificent. A few meters further down there is another point on our path, with a delightful view, especially towards the city of Konitsa. Our path continues its downhill course, which in some places becomes quite steep. We now gradually enter the forest and our route will lead us to a stream, parallel to the river bed of which we will start to descend, changing 2-3 times the side on which we will move. About 1 hour will be needed to descend this rather steep part of our route, and the course begins to normalize. We have now almost reached the end of our route, we are moving downhill and the path leads us to a dirt road above the Konitsa shooting range. At this point there is a fork, following the right path you head towards the stone bridge of Konitsa or going straight down you reach the shooting range and the Ioannina – Konitsa National Road (about 1-1.5 km from the bridge), having descended, from the beginning of the Kerasia path, about 1km. The Kerasia path along its entire length is now clearly visible and very well signposted. The entire route described in terms of kilometers must be a little over 20km and the time required to do it exceeded 10 hours. 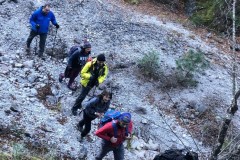